There are many different gun terms that can be confusing if you are new to firearms. One distinction to be aware of is clip vs magazine. It’s fairly common for those who are not very familiar with guns to confuse these two and use the wrong word for what they are trying to describe. This can be embarrassing and it’s helpful to know the right terminology.

The Basic Difference Between a Clip and a Magazine 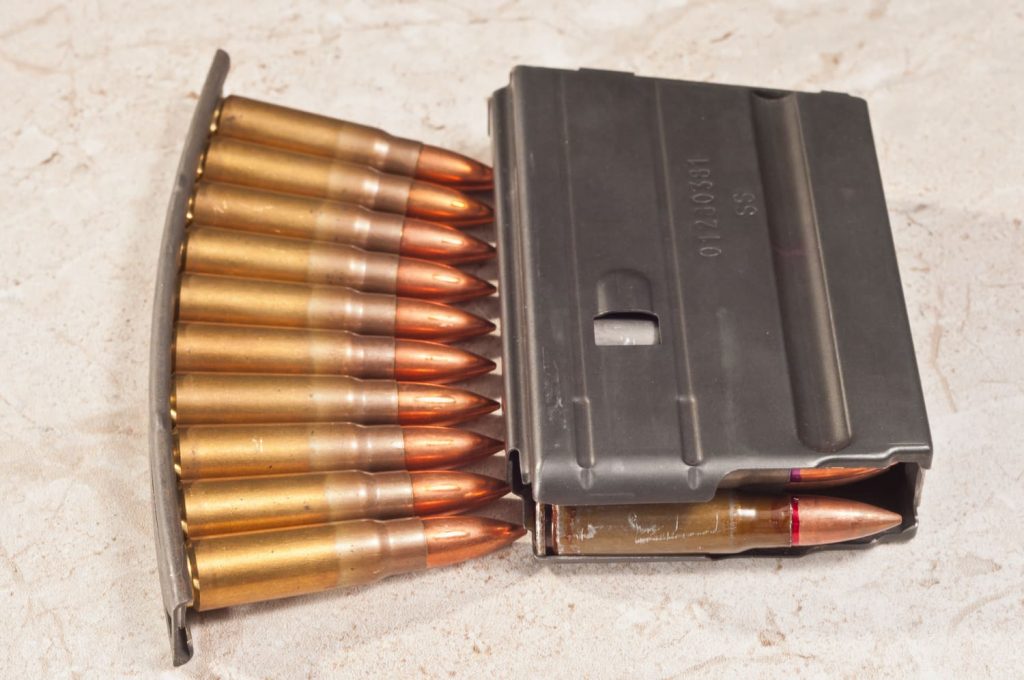 Clips and magazines are both used for loading a gun, but they serve different purposes. A clip holds cartridges together to make them easier to load into the magazine. You can also use a clip to load a cylinder. The magazine feeds rounds into the firearm’s chamber during shooting. In the image above, the part on the left is a clip and the part on the right is a magazine. There are different varieties of clips and magazines that may look different than this example. In general, magazines are referenced more often. This is because all guns besides revolvers or single-shot firearms have a magazine. Conversely, clips are not necessary for the operation of firearms and not all models use them.

A stripper clip is the most common variety and loads a magazine from the top. The “strip” on the side holds the ammunition and allows you to easily push the rounds into the magazine. The cartridges are removed from the clip as they are loaded and the clip itself does not go into the magazine.

En bloc clips are associated with the historic M1 Garand rifles used by the United States during World War II. Unlike stripper clips, these are inserted into the magazine and are the reason M1 Garands make a distinct “ping” sound when they run out of ammunition.

These clips are in the shape of a circle or half circle and are used for loading revolvers. They position the ammunition so that it easier to place in the cylinder.

A detachable magazine is designed so that it can be loaded and then inserted into the firearm when it is ready for use. These are incredibly common and are used for a wide variety of guns.

An internal magazine, also called an integral box magazine, is usually found on bolt-action rifles or older semi-automatic rifles. It is built into the firearm and is not meant to be removed. You load these magazines from the top.

A tubular magazine is fixed to a gun, usually under the barrel, and is common for 22-caliber rifles, lever-action rifles, and shotguns. Rounds need to be loaded one at a time.

Guns and Accessories at The Hub

The Hub offers a large selection of firearms and accessories, including clips and magazines.

Visit either of our Arizona gun stores today.